In my interview with Jamie Repenning, President of Colorado-based Floyd’s 99 Barbershop, I was struck by the fact that even as Colorado businesses reopen, constraints in the number of customers that can be in the shops at a time mean that businesses will reopen knowing that they’ll be losing money.  In fact, many were losing LESS while closed than they will reopened.

But, I haven’t heard loud complaining.  I think that says great things about Colorado business and Colorado entrepreneurs: that putting their staff to work serving customers is the priority. That’s gratifying to me.  Sure, maybe your do-it-yourself haircut wasn’t as bad as you thought it would be.  Still, it’s time to reward the commitment of our Colorado businesses by going back to them and leaving big tips.

Coronavirus 1 – Don’t Just Be Part of the Cacophony

Of course we’re all talking about COVID-19.  It’s pretty much the ONLY thing we’re talking about.  Every organization’s focus is on it, and every organization feels compelled to communicate about it – to add to the dialogue because it seems if we don’t, then we’re irrelevant now.  It doesn’t matter that before COVID-19 we had a perfectly wonderful business focused on delivering products or services to customers who wanted them – now our business is all about COVID-19. Communicating during and about COVID-19 should be within the context of staying connected to the people who cared, and will care again, about how we served one another before all this.

This headline is a tweet from Simon Sinek, the author of Start with Why.

In my conversation with Lee Mayer of Havenly, we talked about the hard work of running a startup, and the huge personal price to be paid.  I asked, “Do those close to you understand your challenges and sacrifice?”  The answer: “No, not always.”  Being a startup CEO is a tough existence.  Social marketing guru Gary Vaynerchuk says, “Ideas are Shit – it’s all about execution.”  And he’s right. 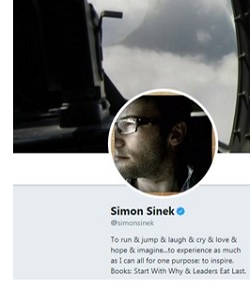 Our world is so cluttered, particularly in media.  When I get on LinkedIn for example, I see everyone busy posting and reposting – and sometimes I get sucked into admiring them.  Then I remind myself that the people most worthy of respect, the best role models, are not those creating social media IMPRESSIONS.  It’s odd that I have to repeatedly remind myself to respect WORK over impressions.  But I do, and we all should.

So why am I featuring a tweet as the headline?  Because Simon Sinek uses social media to spread his work, not as the work itself. Being an entrepreneur and a leader – that’s hard work – and it’s what we ought to admire to support what Lee Mayer describes as a culture that builds on success.

The original title of this blog was, “Congress Sucks – Because of Me!” and it was all about how as a moderate, I don’t make my voice heard.

Then a conversation with my son Dan, got me thinking… actually our members of congress are AWESOME!… I’ve missed it until now, and I’m feeling pretty dumb about it.

What is the most powerful, most fundamental element of marketing? Find and cultivate a sustainable niche. And what do members of Congress do? “Appeal to their base.” Yup. I’ve been criticizing them for “pandering to the crazies.” Guess what? As a “moderate,” I’m not their customer. They aren’t trying to sell to me. Do we chastise Tesla for appealing to an upscale, image oriented audience? Do we scream at Walmart for focusing on low prices? No – we call them smart, savvy, and focused. Our elected officials are doing what any excellent marketer does – focusing on their customer – those who help them get elected. Improved governance requires that moderates figure out how to make ourselves seen as desired customers of our members of Congress.

In the meantime, perhaps we can at least learn marketing from them.

Doubted by Others – Crumple or Think?

I love movies with lessons.  “Sully,” brilliantly staring Tom Hanks, is about the pilot who in 2009 successfully performed an emergency landing on the Hudson River, saving all 155 passengers.  Aside from the landing itself, the drama was about the NTSB’s questioning of Captain Sullenberger’s decision to land on the river and not at a nearby airport.  The strongly implied accusation was that Sully had made the wrong decision, needlessly endangering the lives of the passengers and costing a plane. As I watched, I felt awful for Sully, who under the inquiry, began to doubt himself, and the doubt became escalating fear that maybe they were right.  The deep dread of self-doubt – that gut-wrenching feeling – is one of the most deeply painful human emotions.  I’ve had it too many times.

I saw two business leadership and life lessons in this movie:

First, it’s hard to think clearly, to solve rather than crumple, in the midst of self-doubt – Sully did that, and through his regained composure, managed the situation.

Second, it’s tempting to harshly judge our decisions and those of others. Yes, let’s evaluate.  Then let’s temper the judgment, recognizing that only people who put themselves into situations of gravitas can make decisions that prove to be important.

Note: some disagreed about the depiction of the NTSB in “Sully.”